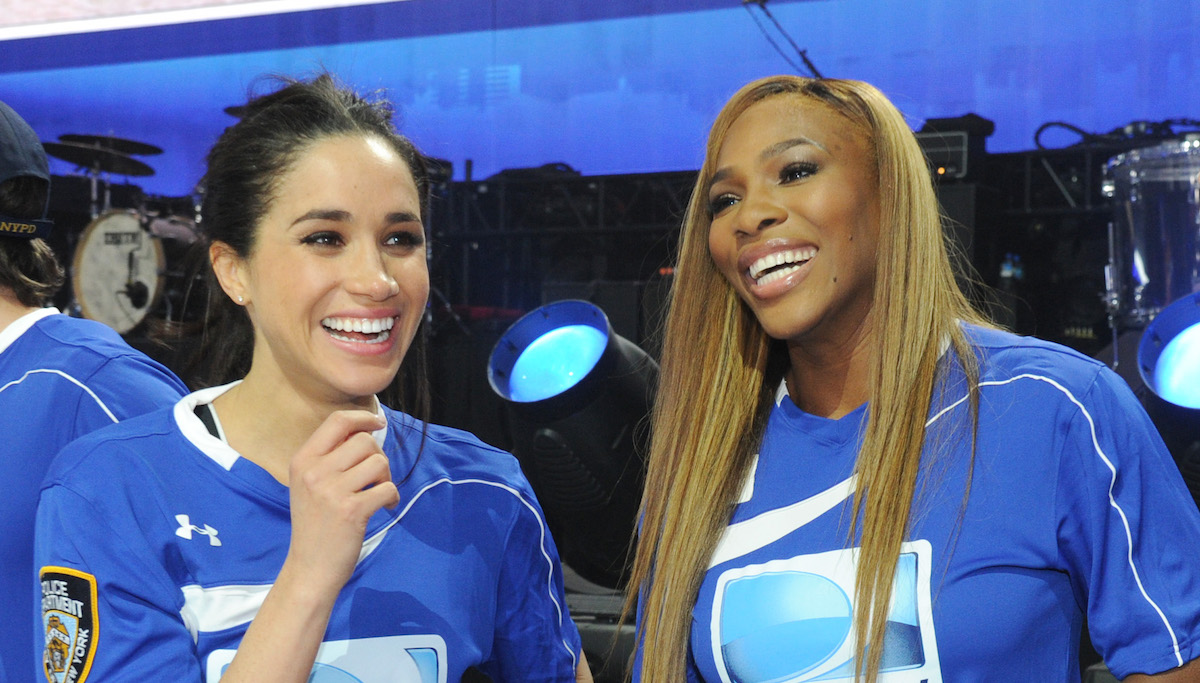 Shortly after the birth of Master Archie, it was all over the news that Duchess Meghan, the former Meghan Markle, had flown to America to be there for her best friend Serena Williams at a big tennis match.

That seemed like friend goals in a big way – but it’s just the latest in a friendship that has lasted the test of time and given us all a bit of girl-group inspiration.

Serena Williams and Meghan Markle first met way back at  a party for the 2010 Super Bowl in Miami, and just clicked – that friendship is thriving a decade after. Williams and husband, Alexis Ohanian – were front and center at the 2018 royal wedding.

Football, not tennis, brought them together

Meghan and Serena first met at a Superbowl party in 2010, and while the two may seem like an unlikely pair–as they come from two different worlds of the celebrity stratosphere–the connection was instantaneous.

As Meghan said on her personal blog The Tig, they “hit it off immediately.” The two participated in DirectTV’s Celebrity Beach Bowl together and teamed up for a flag football match. Describing their first meeting on The Tig, Meghan wrote:

Taking pictures, laughing through the flag football game we were both playing and chatting not about tennis or acting but about good old fashioned girly stuff.

Meghan Markle on The Tig

Since then, Meghan and Serena have been friends for years and continued to support each other in their careers and personal lives. Even after moving to the UK, Meghan ensured that she would still be present for the tennis boss.

She flew all the way with a newborn to see me play at New York and flew all the way back that night. I probably couldn’t have done that. It kinda goes to show you what an amazing person that she is.

In 2019, when Serena won her third consecutive title for the U.S Open championship, Meghan was there to cheer on her friend. She posted on her (now deactivated) Instagram account to share a photo. She captioned the image with “She did it! @serenawilliams! #bravo #friends #usopen.”

While Meghan took down her blog The Tig–we can imagine that she is now too busy for it!–it had always seen their friendship flourish, as Serena herself contributed to it with some blog posts.

The two always been supporting each other, with Serena saying that Meghan has “always been there for her no matter what.”

Serena said Meghan is “the strongest person I know” and “she’s always there, doesn’t matter what she’s going through.” And sure enough, following her US Open outburst in September 2018, Serena Williams has revealed that she confided in her “long-time” BFF Meghan over text.

We have known each other for a long time, but we really kind of are relying on each other a lot recently.

Serena Williams to The Sunday Project

Serena co-hosted Meghan Markle’s baby shower in New York in mid-February 2019, which goes to show that their friendship is not superficial. It makes sense though, since Serena got to see the inception of the illustrious Meghan and Harry romance.

And not only was she a witness to it, she was also a supportive force in helping Meghan through the onslaught of negativity from the media and public.

When you enter a royal family, you need friends you can truly trust, and since dating Prince Harry and later marrying him, Meghan has kept a tight-knit social network.

Meghan considers Serena a friend she trusts deeply. The Duchess once posted on her former blog The Tig:

She quickly became a confidante I would text when I was traveling, the friend I would rally around for her tennis matches, and the down to earth chick I was able to grab lunch with just a couple weeks ago in Toronto.

Meghan Markle on The Tig

When Meghan started dating Prince Harry around 2016, Serena gave her precious advice on being herself, especially after enduring so much criticism from the media at the beginning of her relationship.

Markle credits the rock-solid support from her close friends for helping to sustain her.

Williams, who has gotten her own share of media onslaught throughout her career, was just the rock that Markle needed as the media continued to attack her. That is one thing that never stopped Serena, however much it may have hurt her.

Ultimately, Prince Harry and Meghan Markle’s relationship survived, and Serena and her husband were, of course, invited to the royal wedding.

“To have such a monumental moment in England, nonetheless of all the places, I felt like we were literally watching history,” she said in an interview at the time.  “I feel like in a few years we are going to look back at that moment and it’s going to be so historic….It’s going to be something that people never forget.”

I just wanted to see my friend be happy. And I think that’s what happened.

The world was taken by storm earlier this year when Meghan and Harry announced they were stepping back from the royal family and leaving the UK. It led to a lot of misinformation in the media and negative attention, again, thrown at the couple.

By then, the media was already aware of Serena’s friendship with Meghan Markle. And in their predatory quests for answers and tidbits, they knew who to target when it came getting them.

But Serena would not participate in the media machinery that has harassed her friend countless times. She has shared that she doesn’t enjoy “reading any negative” news on Meghan. This is how she countered it.

Any time I see her name attached to anything, I don’t read it…She couldn’t be a better friend to me. Low moments, high moments, she’s always there, and that’s all I want to be to her.

And Meghan has done the exact same thing for Serena. “I don’t read anything,” she said. “It’s much safer that way, but equally that’s just my own personal preference, because I think positive or negative, it can all sort of just feel like noise to a certain extent these days.”

Eventually, Serena was asked about Prince Harry and Meghan quitting their titles as royals. She categorically refused to answer the question.

She couldn’t be a better friend to me. Low moments, high moments, she’s always there and that’s all I want to be to her.

She refused to feed the fodder and instead, took the moment to remind them of their enduring friendship. That’s a power move.

A true friendship is about the people in the friendship. It doesn’t depend on fame or anything else. They are truly around for each other and that shows an authentic bond. Serena Williams is a champion of many things, and that includes being a friend to Meghan.

Why Body and Mind Harmony Are So Necessary for a Successful Life
How to be the change you wish to see in the world (in small ways)
The Power of Gratitude: 5 Small Tips for a Happier Life
Switching Off Stress: Five Ways To Achieve Work-Life Balance During A Crisis
8 Black-Owned Beauty Brands You Can Support Right Now!